….. But not a series of over 55s events held in the playground obviously. 😉

Firstly a quick reminder to those who wish to have a say in the selection of the replacement playground equipment who have not yet cast their vote. Voting will close at midnight Sunday night so have your say now (see my last post for full details or head over to my forum post HERE).

Secondly, are you over 55 and interested in taking part in a street-theatre piece that will be presented here in the Square in a few weeks time? Or do you know someone living locally that may be interested? You would need to be available from the 13th to the 16th August in order to participate (from 10am to 1.30pm the first 3 mornings for rehearsals at Forest Road Youth Centre, with the actual show on the 16th at 1pm here in the Square). Click on the first of the thumbnail pictures below for full details.

Next, a copy of the summer programme of the free events being held here in the square throughout July and August (starting tomorrow). You should of received a copy of this in your letterbox but here is a copy just in case. Click the 2nd thumbnail below to view it.

Lastly, a list of events for children and young people being put on by the library (and not just our own CLR James Library: All Hackney libraries are getting involved). Again these are all free: All your kids need to do is turn up. Click the 3rd and last of the thumbnail images below to see the list.

Hello again. Here, as promised, is a general update of what the DSRA have been up to over the summer months. This report has been compiled by DSRA Chair, Ben Collins:

The DSRA  committees have been active on your behalf. We know that the first years of a new development are the time to get things right. There have been many strange accounting procedures and building glitches which we have pursued.

The following are brief reports from the two committees that have been active over the summer.

Ever since the first blocks were occupied, residents have been unhappy about the way in which Consort calculates and presents its budget. There have been a string of errors followed by increasing costs. Whether you pay for these via your rent, or directly via your service charges to Consort, these costs are passed on and there have been some inexplicable and rapid rises for some buildings.

The DSRA has this year called for Consort to publish its budget and explain it to our finance committee. We have been dismayed that, despite several meetings, the management company has still not sorted out its common electricity costs. Some buildings appear to have electricity costs running up to ten times more than others with no explanation given. As this report goes to press the DSRA has just met again with the Consort regional manager to insist the issue be sorted out.

Progress on getting the many construction glitches around the Square sorted out is more positive in as much as Barratt appear to be taking our request seriously, and in the last few months have been pushing hard for the Square’s high standards to be maintained.

Trees have been replanted and watered, broken bricks, gutters, and paving slabs replaced, and planters looked after. Some improvement to bike storage has been agreed, although there appears to be a limit to what is possible. The sheeting on the canopy over Blue Street (the passageway between the library and Gaumont Tower) will be replaced soon. We have also worked to ensure street and gutter cleaning is maintained by Barratt, while awaiting full hand-over to Hackney Council. The Council is currently only cleaning the area at the top end of the Square, by the library.

As far as we know, two new eating establishments are expected to occupy ground floor retail spaces in the Phase 1 buildings on the east of the Square. Kitchen air extraction will need attention: Those living in Gaumont Tower are currently getting a fair dose of smell coming into their lobby and lift shafts and the current fan system is not adequate. We have pressed Barratt for a review of the system. Another issue brought to Barratt’s attention is the lack of  both windows and ventilation in the office of Consort Site Manager Sean Stone: They have promised a window and ventilator. We will continue to chase them on both of these issues.

Door security remains a worry, with occasional tampering causing the lock systems to be damaged. We have insisted on daily checks to ensure security is maintained and ask that residents report any questionable locking or damage to any front door, to the concierge in Gaumont Tower, as soon as possible.

Threat To The Eastern Curve Garden

Things are a-stirring with plans to make the land currently occupied by the Eastern Curve Garden into a thoroughfare as set out in the Dalston Area Action Plan. The DSRA met with the developer and architect some weeks back and impressed upon them that the loss of this much-loved community space and garden would be resisted by local residents. Since then, expressions of concern to Councillors have been flowing in, but it is important, if you feel the garden should be kept into the future, for you too to contact the council to express your support of the garden: There is currently no guarantee it will be there in a year’s time.

Cultural Events In The Square

Hackney Council have set up a local Forum for residents to contribute ideas and express views about what events should happen in the Square (minutes of past meetings of this group are available for download from the ‘What’s On’ section of our FORUM HERE). We note that on the week-end of the 28th and 29th of September there is the following event:

Look out for stalls selling a wide variety of books, including works by the African Caribbean Writers Group.

If you want to get involved (and we need resident volunteers) in helping to plan next summer’s Dalston Square events, contact Lucy McMenemy via the Dalston Square dedicated page of the Hackney Council website HERE. This link is also in our link-list in the right-hand column of our website’s homepage, and will keep you abreast of all council-planned events that are coming to the Square.

That’s all for now. I do have some info on the commercial units in the Square as well as an update from Barratt regarding their schedule for finishing up in the Square, but will save that for a post in a few days. Until then, have a good week. 😉

Oops, nearly forgot: Did I mention that the DSRA have their autumn get-together planned for next Sunday, 29th September? 5.30pm until 7.00pm followed by a fountain switch-on in the Square at 7.15. This flier says it all:

Hi all. Just a final reminder that this coming Sunday will see the DSRA’s late summer BBQ event on the 9th floor roof terrace of Gaumont Tower. And just to mention that although it is advertised as running from 5-7pm, no-one will be shooed away at 7pm: With the Paralympic closing ceremony due to kick-off at 9pm that evening, complete with fireworks, it should be a fun evening (even the weather forecast is currently favourable). Be there, or be (Dalston) Square! 🙄 Click the thumbnail below for the full-size poster. 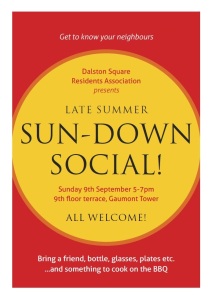