A big ‘Thank You!’ to everyone who voted in our poll to decide what to do for our Christmas social this year. The winning option, with 70.59% of the vote was (imagine a drum roll)…….. The Cafe Route option. Therefore, without further ado, I am very pleased to announce we are going to do something completely different. 😯 😆

So, set for Friday 20th December, from 6pm to 8pm (although you are welcome to stay for extra merriment if you wish), the event will be held in the cosy ‘winter quarters’ of the Eastern Curve Garden (namely the large main greenhouse complete with it’s, when lit, crackling glowing wood burning stove). Mulled wine and toasted chestnuts (fresh from the aforementioned stove) will be available for purchase (all funds go to the garden), and everyone is encouraged to bring a mince pie or three (or something similar) to share with your neighbours.  Poster coming soon.

Next up, news from the recent public hearing regarding the development of Holy Trinity School. After excellent presentations from both Hackney Council and local residents explaining their support for the school expansion, while still very much against the 7 storeys of flats proposed to sit atop it, Mayor Boris Johnson decided to overrule Hackney Council’s decision of earlier in the year and allow the development to go ahead. The 36 meter high (equal to 12 storeys) concrete mass will be taller than all it’s neighbours and will put many existing properties, to it’s West, North, and East, into shadow. Anyone interested in viewing a webcast of the proceedings (where the full picture of the arguments against the structure can be heard) can do so HERE.

Next, Dalston Futures. 45 local residents attended their second meeting recently (much better than the 10 for the first), so momentum is building. THIS from them regarding that meeting, their call for financial assistance through donations, and the next meeting, scheduled for Tuesday 10th December from 6:30pm to 8pm (again in the Trinity Centre on Beechwood Road). The online magazine East London Lines is currently carrying a video recorded at the last meeting which you can view HERE.

One last thing before I finish, many thanks to those who answered our Twitter call for pics of the Christmas Market held in the Square on Sunday. If you missed it yourself, you can see how successful it was by checking our Twitter feed @DalstonSquareRA.

Hi all. As promised I have a bunch of news and updates for you, but have decided that rather than bore you all with a monster long post, I will break it down into, probably, 3 posts of related topics. To get the ball rolling then is news of recent and upcoming development proposals that are close to home.

First off, the proposed development of the Holy Trinity School site at the south-east corner of Dalston Square. I have referred to this development several times over the last 6 months or so, and there are a couple of threads over at the forum (HERE and HERE) that document the work of a truly dedicated team of Dalston Square residents (who have been battling to stop Telford Homes’ ludicrous plans), and so will go no further into the details. The news though is the decision, decided at the council’s public planning meeting last Wednesday, that the application has been rejected. This is excellent news and proof that democracy and a well presented argument can still stop big developers in their tracks. Whilst plans to expand the existing school to provide much needed school places was generally accepted as a good idea, Telford’s attempt to use this as an excuse to build 101 apartments that would have seriously affected current and future residents of both Dalston Square and the Rhodes Estate, it was argued, was simply unacceptable. The application was rejected on the grounds of not sticking to the council’s own DAAP (Dalston Area Action Plan), and issues with the design of the proposed structure. After celebrations had died down, the Dalston Square team unanimously decided that an approach would be made to the principal of the school to see if any assistance could be offered with regard finding sources of funding that would allow the school to go ahead with expansion, without the need to involve big property developers. A magnanimous gesture I am sure you will agree.

Now though, there is a new cloud on the horizon. Ben Collins, as Chair of the DSRA, was recently approached by a consultancy with regard a pre-planning meeting on the proposed development of the Kingland Shopping Centre. If you are unfamiliar with this proposed development, Loving Dalston did a piece on it HERE, and Dalstonist covered the story HERE. More high-rises (up to 14 stories in places), more high-rent retail space (no doubt to be filled with the same chains you find on every high-street these days), a serious threat to Ridley Road market, and the loss of the Eastern Curve Garden are all on the drawing board. The DSRA is discussing where we go from here and will work on a plan to ensure that, as with the school development above, the interests of developers do not drive forward a project that is in the interest of neither local residents nor local businesses. If allowed to proceed as currently planned this would completely change the village we love. Watch this space for updates as the consultation process progresses and more details become available.

That’s it for this post, the next installment of news……..

Lots Of Minutes….. But Not An Hour.

Lots of meeting minutes to share with you, all posted over at the forum. Firstly, from a meeting of the Dalston Lane Community Working Group Ben Collins (DSRA Chair) and I attended back in December HERE. Secondly, from a meeting of the DSRA’s Buildings Maintenance sub-committee meeting with Barrat and Consort on January 10th HERE. Thirdly, from the DSRA general meeting of January 10th HERE. Lastly, sent to me by Lucy McMenemy of Hackney Council, minutes from the meeting of the Culture and Community Engagement Forum meeting for Dalston Square that was held on January 16th HERE (scroll down to my last entry on the page). As always, simply click the highlighted link to save a pdf copy of the document to your computer for your perusal. If you are unable to access the first three links above, read THIS, and, if you qualify, follow it’s instructions HERE. Just a thought (which led to my post title above); If you have minutes from 60 meetings, do you have an hour? 🙂

One last thing before leaving you all in peace. I have been contacted by Nick Griffiths of Land Of Kings (www.landofkings.co.uk) organisers of an annual Dalston music and arts festival. Let me share his email with you:

The fifth Land of Kings (2013) will take place on Sunday May 5th and we will also be debuting a new festival the following day (Monday 6th) aimed at local families, to be called “Land of Kids”.  Both festivals are collaborations with a number of local artistic and cultural venues such as Arcola Theatre, Bootstrap Company (including Print House Gallery, The Bunker and Dalston Roofpark) and Café Oto.  The night time part of the programme also includes venues across the neighbourhood such as Vortex Jazz Club, The Alibi, Servant Jazz Quarters, Rio Cinema, Birthdays, Shacklewell Arms etc.
In previous years the festival has taken place largely in the area’s indoor music and arts venues as well as a few temporary event spaces for which we have applied for Temporary Events Notices (TEN).   We are planning an outdoor element to the festival this year, on Ashwin Street and in Abbot Street car park,  and for that we’re required to apply for a temporary Premises License as the number of people we are expecting is more than 499 (the limit for running an event under a TEN).
As part of the planning for this year’s event we wanted to check in with local residents groups to share our plans as well as what we will be doing to limit the impact on the area and work with local people to make it as successful and smooth running an event as possible for all.  I wondered if you’d be able to share this email and the attached site plan with your respective groups.  The main part of our license application pertains to the car park at the end of Abbot Street where we’re hoping to build a temporary live music stage, to run in the afternoon until 10pm on Sunday 5th May, and until 7pm on Monday 6th May.

The site plan is attached below: click on the thumbnail image to see the full-size version. Is it just me or does this sound really cool? More details will follow when finalised. Enjoy the rest of your weekend folks. 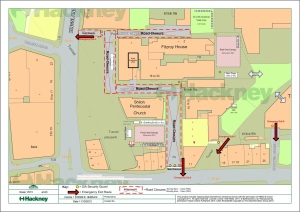 Hello again. News not specific to Dalston Square this time, but relevant as Thames House is right on our doorstep: The north side of Dalston Lane, to the east of the Eastern Curve Garden. As you will see from the literature below (click on the thumbnail images for the full-size version), this is going to be an extensive redevelopment comprising of 77 new flats and houses (a mixture of affordable family homes and private market apartments) as well as commercial space for small businesses. Due to it’s scale, there will be a public exhibition to consult with local residents on 3rd October, and anyone interested is seeing the plans or asking questions is invited (see the flyer below).

Error: Twitter did not respond. Please wait a few minutes and refresh this page.